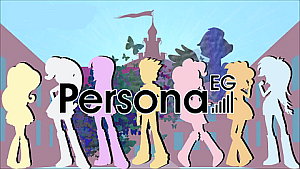 Flash Sentry has always had something of a solitary life. Distant from his parents, with very few real friends, he lived life one day at a time in the rainy climate of Seaddle, with only his guitar to pass the time.

When his parents' jobs take them overseas for a year, they send Flash to Canterlot, where he will attend Canterlot High School and live in the dorms.

But who is the mysterious long-nosed man that appears in a dream? What is "Persona"?

He's about to learn just how much a young man's life can change in a single year... And uncover some of the truths hidden beneath the veil of society.

A Persona / My Little Pony: Equestria Girls crossover written by MythrilMoth. Updates daily to mimic story progression in the style of Persona 3 and Persona 4.

; the latter is known as the "LTE version", a more mature-rated director's cut equivalent to the story. There is a collection of non-canon side stories called Persona EG If

On May 6, 2019, MythrilMoth unfortunately passed away, but the story's coauthor Zef is planning to continue the story.

The following tropes are associated with Persona EG: