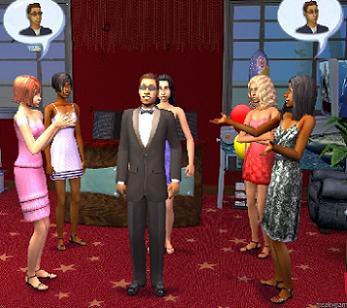 He'll be Mayor by Thursday.
Advertisement:

So you're playing a game that, for whatever reason, rewards you for pursuing a romantic partner. All well and good: increasing Relationship Values that have beneficial effects, some game-mechanical in nature, others less so, has a long and time-honored place in games about relationships.

But what happens if you get these bonuses for seducing everyone who's even mildly interested in you, rather than developing a single intense relationship?

In these games, the ultimate path to power involves rolling every relationship up into a massive Love Dodecahedron, Katamari style, effectively turning the player character into a Harem Seeker.

Remember that this isn't limited to romantic relationships. If getting your friends to trust you results in gameplay benefits, that's this trope as well.

This is basically gameplay-motivated Polyamory. Often a Game-Breaker. See also You Lose at Zero Trust.

Not to be confused with Friends with Benefits.