A Chat with Satan 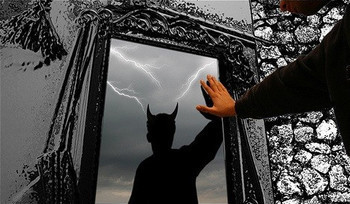 "Everyone who wants to grow up, sooner or later sits down and has a chat with Satan. Or they never grow up."
— Amos Maple, Down From Ten
Advertisement:

Before the hero can achieve his destiny, he has to face himself and defeat the darkness in his own heart. Because Only the Worthy May Pass, someone has to put the hero to the test and make sure that he has the character necessary to see things through.

Enter Satan. Sometimes this is the literal Guy with the Horns and Pitchfork (or local equivalent); sometimes it's just the character's Shadow Archetype, or the Old Master. Sometimes he's a Louis Cypher, other times he actually introduces himself as Satan. Regardless, it's the character who knows the hero's dark side better than the hero himself — and is determined to make sure the hero sees it, as well.

If the hero fails this Secret Test of Character, expect things to end badly for him.

Essentially, when a supporting character talks to the hero to reveal What You Are in the Dark. Differs from a Deal with the Devil in that the Satan-figure is primarily concerned with exposing the hero's true nature (and can sometimes be akin to a Trickster Mentor, actively trying to improve the hero by getting them to see and reject their darker side); if the hero does not succumb to temptation, it doesn't mean that the tempter has failed in his mission. A type of Threshold Guardian. If the character playing "Satan" really does want to corrupt the hero, then they're The Corrupter.

In works with Jungian themes, the “satan” figure will be played by the hero’s shadow (note that Jungian shadows on their own aren’t necessarily evil). In these cases, the shadow is trying to get the hero to accept the truths they don’t want to see for the purpose of self improvement.