Film / The Messenger: The Story of Joan of Arc 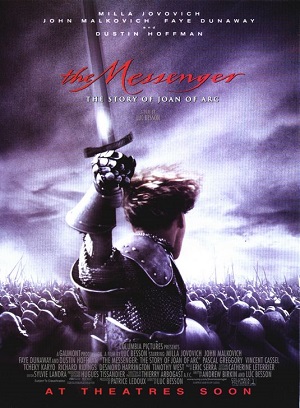 France is going through the darkest period of its history.
Only one thing can save it...
A miracle.
Advertisement:

The Messenger: The Story of Joan of Arc is a 1999 epic medieval film by Luc Besson about Joan of Arc. Milla Jovovich plays the titular heroine, with John Malkovich as Charles VII of France, Faye Dunaway as Yolande of Aragon and Dustin Hoffman as Joan's conscience (It Makes Sense in Context). Naturally the movie first follows Joan's childhood and later her time in the French army, claiming to hear voices from God. The movie also features a considerable amount of Artistic Licence, with Besson claiming he wanted to tell more of an anti-war story — thus showing through Joan that war changes people.

The first half of the film plays out as you'd expect. Then the second half has Dustin Hoffman show up as Joan's conscience — and Deconstruct everything about the familiar story. Also be warned of Milla Jovovich Chewing the Scenery.