Literature / The Children of Húrin 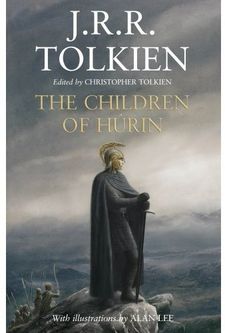 Sit now there, and look out upon the lands where evil and despair shall come upon those whom thou lovest. Thou hast dared to mock me, and to question the power of Melkor, master of the Fates of Arda. Therefore, with my eyes thou shalt see, and with my ears thou shalt hear; never shalt thou move from this place until all is fulfilled unto its bitter end!
Advertisement:

A Dark Fantasy novel by J. R. R. Tolkien, it was edited posthumously by his son Christopher. This is one of Tolkien's "Great Tales" of the First Age of Middle-earth—one of the earliest and most elaborated tales. It exists in many versions, both in prose and in poetry, some almost complete and some as fragments. The various versions and parts have previously been published in The Silmarillion, Unfinished Tales of Númenor and Middle-earth, and The History of Middle-earth known as Narn i Chîn Húrin (aka "The Narn"), but The Children of Húrin is the first publication to compile it all into a single complete text.

Following the cataclysmic destruction of the Battle of Unnumbered Tears, Húrin, the greatest of all mortal warriors, was captured by the forces of Morgoth. The Dark Lord offered Húrin freedom in return for revealing the location of the Elvish city of Gondolin. Húrin refused and the enraged Morgoth cast a curse upon him and his family for all eternity. The remainder of the plot follows Húrin's struggling son Túrin and daughter Niënor as the curse winds its way toward a terrible conclusion.

The Children of Húrin is one of Tolkien's darker works and deals with darker subject matter, and is less well-known than The Hobbit and The Lord of the Rings. There is no happy ending here. The Children of Húrin is closer in tone to the likes of A Song of Ice and Fire (though in style still significantly different), and overturns the common conception of Tolkien as a writer of Black-and-White Morality.

I also have been meshed in the doom of the Children of Húrin, and thus with words have slain one that I loved.
'Can I not, can I not, Mablung?' cried Túrin. 'But why no! For see, I am blind! Did you not know? Blind, blind, groping since childhood in a dark mist of Morgoth! Therefore leave me! Go, go! Go back to Doriath, and may winter shrivel it! A curse upon Menegroth! And a curse on your errand! This only was wanting. Now comes the night!'