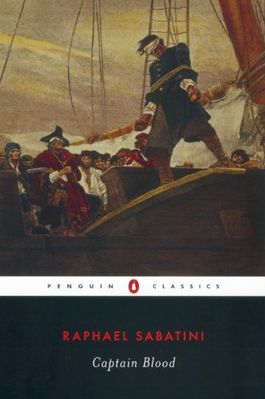 Captain Blood: His Odyssey is a 1922 novel by Rafael Sabatini.
Advertisement:

Peter Blood, an honest man of true character and a humane doctor, is wrongfully imprisoned for treason under the laws of King James, and deported from Britain to a tropical colony at Bridgetown where he is sold as a slave at auction. Soon he encounters romantic inspiration, conflict, injustice, and ultimately finds himself in charge of an armada of pirate ships of various flags and national alliances, becoming the famous and invincible Captain Blood, the most honorable and remarkable buccaneer throughout the South Seas.