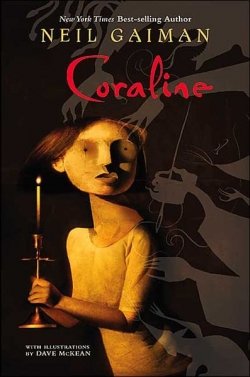 "What is there to be frightened of about buttons?"
— Neil Gaiman, "Koumpounophobia

Coraline is a 2002 novella written by Neil Gaiman and illustrated by Dave McKean.

Coraline Jones is a girl with loving but distracted and inattentive parents. Having recently moved into a new home without any friends around, she finds life utterly boring. Then, one afternoon, she opens a mysterious door in her house. Behind that door lies a different world where Coraline finds other versions of her parents who dote on her, spoiling her with wonderful toys and home-cooked meals. But something oddly sinister lurks just beneath the surface...