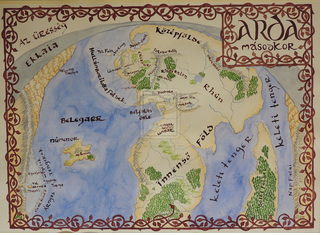 The term Legendarium* A Latin word meaning a collection of legends, such as lives of Christian saints is used as a collective term for all the High Fantasy works of J. R. R. Tolkien set in the world of Arda/Middle-earth. (To be exact, Middle-earth* spelt with hyphen and lowercase e is a continent in the world Arda, but the former is also commonly used to refer to the whole universe.) The term is used mostly out of convenience, as Tolkien used it informally in private letters a few times but never really gave the entirety of his fictional universe or setting a proper "label" otherwise. So while not strictly a Fan Nickname, fans of his works, including academia, have gone on to use it more than he did.

Only the first three were published during his lifetime; the rest were published posthumously by his son and literary executor Christopher, except The History of The Hobbit which is by John Rateliff, The Nature of Middle-earth by Carl F. Hostetter, and The Fall of Númenor by Brian Sibley. Of these, The Silmarillion and The Children of Húrin consist of a single narrative edited together from Tolkien's texts, while the rest are collections of Tolkien's material (with commentaries and notes), ranging from complete narratives to early and new drafts, to essays.

The Letters of J. R. R. Tolkien (1981) includes some details and elaborations about the stories which are not found anywhere else, and Pictures by J. R. R. Tolkien (1979) and J. R. R. Tolkien: Artist and Illustrator (1995) contain numerous illustrations of Arda, although these books are not concerned solely with the Legendarium. Several of JRRT's linguistic texts which did not appear in The History of Middle-earth have been published in the periodicals Vinyar Tengwar, Parma Eldalamberon, and Tyalië Tyelelliéva. Some of these were later collected in The Nature of Middle-earth.

Non-canonical works are additions to the legendarium by authors other than Tolkien, with various legal status. They are not considered proper Arda or Middle-earth lore by Tolkien scholars or buffs, but rather form their own alternate continuities.

Despite all the on-screen stabbing, slashing, squashing and even decapitating, not a single drop of blood is shed in The Hobbit.

Despite all the on-screen stabbing, slashing, squashing and even decapitating, not a single drop of blood is shed in The Hobbit.