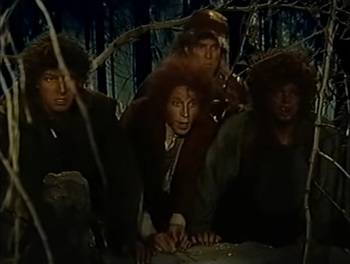 Our titular Hobbitsnote From left to right: Taneli Mäkelä as Frodo, Jari Pehkonen as Pippin, Pertti Sveholm as Sam, and Jarmo Hyttinen as Merri
Sam: "Is it possible that there is still a hobbit who doesn't know the tale of the ring? Very well. I will tell it. One last time."
Advertisement:

The Hobbits (original title: Hobitit) is a low-budget Finnish 1993 nine-part television miniseries, based on J. R. R. Tolkien's most famous works: The Hobbit and The Lord of the Rings. It's adapted from a Finnish 1988 play version of the story, features mostly the same cast, and was directed by Timo Torikka.

As expected, it's quite a Compressed Adaptation. The Riddles in the Dark chapter is the only part of The Hobbit which is actually shown on screen, and the rest of the series focuses entirely on Sam and Frodo, turning the War of the Ring into a Great Offscreen War. However, it also includes parts of the book which are usually Adapted Out, most notably Tom Bombadil and The Scouring of the Shire.

The plot is narrated to us through a Framing Device where an elderly Sam tells the story one last time to a group of young hobbits, before he too journeys into the West.