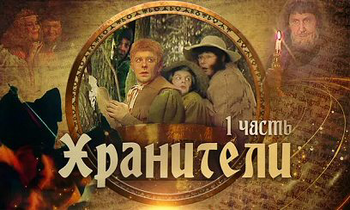 The Keepers (original title: Khraniteli) is a 1991 Soviet two-part adaptation of J. R. R. Tolkien's The Fellowship of the Ring. It was directed by Natalya Serebryakova. Adapting only the first part of Tolkien's series, it follows the plot of the book fairly closely, albeit altered to fit a slightly abstract, No Budget presentation.

Airing only once on television, it was believed to be lost for 30 years, only for it to be miraculously discovered in 2021 in the archives of 5TV, who made both parts

Compare The Hobbits, a rather similar Finnish adaptation. No relation to the fantasy books by Ted Sanders.