These are the characters from The Hobbit by J. R. R. Tolkien.

This page is for the BOOK ONLY. For the characters as they were portrayed in the Peter Jackson film trilogy, see here.

For the characters that are portrayed in the Amazon's The Lord of the Rings: The Rings of Power, see here. They are set in a different continuity from the films.

See also character sheets for The Silmarillion and The Lord of the Rings (or the latter's film versions), which are set in the same universe (and, indeed, feature some of the same characters). 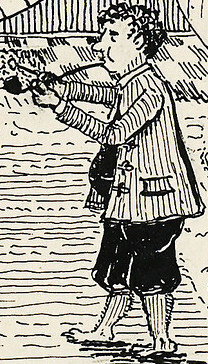 Bilbo smoking his pipe at Bag End, as depicted by Tolkien.

A Hobbit chosen by the wizard Gandalf to accompany 13 Dwarves on a quest to reclaim the Lonely Mountain and its treasure from the dragon Smaug.

See The Lord of the Rings character sheet for tropes that apply to him in that work.

(( When Bilbo locates and pockets the Arkenstone, he knows what it is, what it means to Thorin, and that it was almost certainly meant to be excluded from the "pick your own share" clause of his contract. He nicks it anyway, admitting that "Now I truly am a burglar". It's only later that he tries to make good of his action by handing it over to Bard and Thranduil to use as a bargaining chip with Thorin (which in itself is a pretty dodgy action but done for the purest motives).
Thorin II Oakenshield
The leader of the Company of Dwarves who have set out to reclaim the Lonely Mountain from Smaug the dragon. He is the uncle of Fíli and Kíli.
Bombur
A dwarf with just enough Hidden Depths to break through being often described as "fat". For the first act, he can usually be counted on putting in the heavy work and being described as heavy. But after that...
Advertisement:
Balin
Dori
Glóin
Father of Gimli
Fili and Kili

The leader of the Eagles of Manwë at the time of the story.

Beorn
"A very good tale! The best I have heard for a long while. If all beggars could tell such a good one, they might find me kinder."note After he confirms their story is true, he says he likes it even better.
The Elvenking
"Take him away and keep him safe, until he feels inclined to tell the truth, even if he waits a hundred years."

The ruler of the elves of Mirkwood. He is later named Thranduil in The Lord of the Rings, where he sends his son Legolas to Rivendell and thence to join the Fellowship of the Ring.

Bard the Bowman
"The dragon is coming or I am a fool!"

The captain of Lake-town's archers, he is actually of the lost noble house of Dale.

Roäc the Raven
"We would see peace once more among Dwarves and Men and Elves after the long desolation."
Dáin II Ironfoot
Thráin II
Thrór 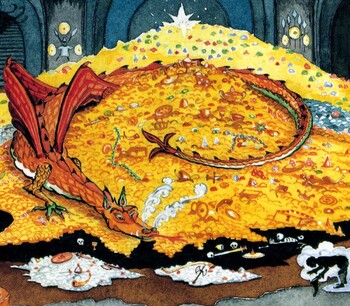 Smaug lying on his treasure, as depicted by Tolkien.
"Lake-men, some nasty scheme of those miserable tub-trading Lake-men or I'm a lizard. I haven't been down that way for an age and an age; but I will soon alter that!"

A dragon in the Third Age, Smaug is the last great dragon left in Middle-Earth, and the main antagonist in The Hobbit. Prior to the events in the story, he lay waste to Dale and captured Erebor, the Lonely Mountain, from the Dwarves. For two hundred years he hoarded Erebor's treasures.

A trio of vagabond trolls that the Dwarves run afoul of.

The Great Goblin
"Slash them! Beat them! Bite them! Gnash them! Take them away to dark holes full of snakes, and never let them see the light again!"

Bolg
A vengeful Orc chieftain who led the Goblins in the Battle of the Five Armies, where he's killed by Beorn.
Azog
"If beggars will not wait at the door, but sneak in to try thieving, that is what we do to them. If any of your people poke their foul beards in here again, they will fare the same. Go and tell them so! But if his family wish to know who is now king here, the name is written on his face. I wrote it! I killed him! I am the master!"

Orc-chieftain of Moria and father of Bolg, he started the War of the Dwarves and Orcs when he slew Thrór (grandfather of Thorin II Oakenshield), and later killed Thrór's nephew Náin before perishing at the hands of Náin's son Dáin II Ironfoot.

Gollum
See his character sheet in The Lord of the Rings.
Wargs
Wolf-like monsters living around the foothills of the Misty Mountains, the Wargs are allies of the Goblins, often joining them on raids on human towns and in their enmity against the Dwarves.
The Spiders of Mirkwood
"You were quite right, the meat's alive and kicking!"

Enormous talking spiders who haunt the depths of Mirkwood and prey on passing travelers. They're described in other Legendarium sources as being the progeny of Shelob, and thus descended from the ancient spider-monster Ungoliant, but by the time Bilbo runs into them they're become far smaller and less dangerous than their titanic forebears.

The Master of Lake-town
People of Lake-town: He may have a good head for business, especially his own business, but he is no good when anything serious happens!

The ruler of Lake-town, elected by the people. Akin to a merchant prince, though he's not royalty.

The Necromancer
A dark presence residing in southern Mirkwood that Gandalf goes to confront. See here for his true identity.
Were-worms
A unknown race of creatures which dwell in the Last Desert in the East, as mentioned by Bilbo.