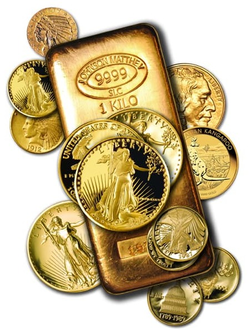 Gold (symbol Au, atomic number 79) is a yellow, shiny, soft, dense, rare, corrosion-resistant, and very valuable metal — the last property means that it turns up heavily in tropes, both figuratively (signifying purity and value) and literally.

You know gold is heavy, but it's almost certainly heavier than you think. The History Channel interviewed a guy who had a part-time job ferrying gold bars to and from the vaults for an internal audit of Fort Knox back in the 1970s. He mentioned how a brick of gold is heavy (weighs about 33 pounds), is dirty (the dust isn't cleared out of sealed vaults), and is dangerous (drop a gold brick on your foot and you'll break every bone.) For the same amount of space, gold is about ten times as dense as brick. Lifting a single bar is something you do with both hands, carefully. Lifting a crate of gold is done with heavy machinery. Fiction rarely gets this right.

Gold is valuable in part because it is so rare, much rarer than it is commonly depicted in fiction. A total of about 160,000 metric tons of gold have been mined throughout all of human history, or 8500 cubic meters as a solid mass of pure gold. Assuming Scrooge McDuck's money bin is a cube six stories tall, filling it with gold would require 2/3 of the world's gold supply.

For most of human history the physical properties of gold have limited its uses to aesthetics, such as jewelry, or the storage of wealth, given its relative rarity in comparison to other elements obtainable through pre-industrial revolution processes. Gold is extremely ductile, which means you can really stretch it out and flatten it easily. This made it easy for the ancients to work with (compared to other metals), in addition to the fact that it was pretty to look at.

These days, however, gold has a wide range of uses. One of the most popular uses is in electronics, as it is one of the best conductors of electricity. Gold is slightly less conductive than copper and silver

but is highly resistant to corrosion compared to them. Those silicon chips in your computer? They're connected to the pins on their casings by very fine, very pure gold wires. The aforementioned corrosion resistance means that this is the only way wires could be that fine; copper or silver wires would just turn into non-conductive oxide. Recycle a tonne of old computers and you can recover a whopping 250 grams of gold.

Fun fact: In Alchemy, the philosopher's stone can turn lead into gold and make men immortal. Why? Because gold is an immortal metal, never tarnishing. Gold is the perfection of the world of metal, and the Philosopher's Stone can perfect anything.

For more raw facts about gold see Wikipedia's article on the stuff.

For tropes about gold, both literal and figurative, see The Gilded Index.