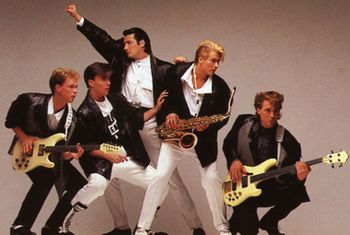 Eighties pop personified.
Gold! Always believe in your soul,
You've got the power to know, you're indestructible,
Always believe in, because you are Gold!
— "Gold"
Advertisement:

Spandau Ballet are a British pop band with Soul, Funk and Synth-Pop influences. Along with groups such as Duran Duran and ABC they were pioneers of the New Romantic movement, producing the style's first major hits with their debut single: "To Cut a Long Story Short" and their first album Journeys to Glory, both of which entered the top ten of the respective charts.

The group was formed in 1979 by London art school students Gary Kemp (lead guitar, keyboards, and songwriting), Steve Norman (second guitar, synthesizer, and percussion) and John Keeble (drums). The addition of Steve's friend Tony Hadley on lead vocals and Gary Kemp's younger brother Martin on bass guitar completed the line-up. Adopting the name Spandau Ballet and an over the top New Romantic mode of dress which included frilly shirts and kilts, the group recorded their successful debut album, Journeys to Glory, which mixed funk rhythms with New Wave pop melodies. However, their second album Diamond was less successful in spite of producing one of the group's biggest hits, "Chant No. 1 (I Don't Need This Pressure On)."

For their third album, True, the band switched styles to a more soulful pop sound, with Steve Norman moving from guitar to saxophone. The new sound was a hit and the album went to the top of the charts, producing the group's sole UK number one and only American top ten hit, "True," as well as signature hits such as "Gold" and "Lifeline." The band were able to maintain their momentum with Parade and the rock album Through the Barricades, but they never quite matched the success of True and began to drift apart. The Kemp brothers' increasing involvement in film and television acting earned the ire of the rest of the group and Spandau Ballet split acrimoniously in 1990. A few years later, Tony Hadley, John Keeble, and Steve Norman mounted an ultimately unsccessful court case against Gary Kemp over several years worth of unpaid royalties (Kemp wrote all of the songs but had supposedly agreed to share royalties with the rest of the group).

In spite of the consequent poor relations between the band members, the band managed to surprise everyone by successfully reforming in 2009 with a reunion tour and a new album called Once More, featuring acoustic covers of their old hits. The reunion lasted until 2017 when Hadley left the band under unclear circumstances. The band recruited another singer but despite playing some shows, it became clear that without Hadley's trademark vocals the band were not what they were. The new singer left in 2019 and the band are currently on hiatus again while the members pursue other projects.

This group demonstrates examples of: