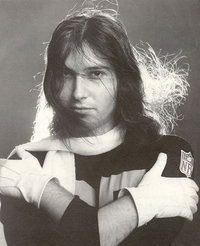 An American songwriter, composer, arranger and Record Producer famed for his love of both Peter Pan and Rock & Roll clichés, James Richard Steinman (November 1, 1947 - April 19, 2021) claimed that he became enamoured of rock music at an early age when he heard a Fender Telecaster overloading a Marshall amplifier. His work, which he described as "Wagnerian rock", is characterised by a sound that is simultaneously massive and low-key, combining influences ranging from Phil Spector's "Wall of Sound", Springsteen-influenced anthems of Townshendian teenage angst.

Steinman got his start in musical theatre, scoring, arranging and playing piano in a number of productions. He met Meat Loaf, then an aspiring singer and actor, when he auditioned for an off-Broadway musical composed by Steinman called More Than You Deserve and they began a partnership that led to the massively successful album Bat Out of Hell.

Since then, he worked as a prolific producer and composer. While more inclined to be involved in the behind-the-scenes aspects of the music business, his solo excursions included the 1981 album Bad For Good (originally intended for Meat Loaf) and the all-female rock group Pandora's Box.

Aside from his occasional reunions with Meat Loaf, he collaborated in some capacity with artists such as Billy Squier, Barbra Streisand, Barry Manilow, Bonnie Tyler, Air Supply, Céline Dion and Andrew Lloyd Webber.

Tropes associated with Steinman include: