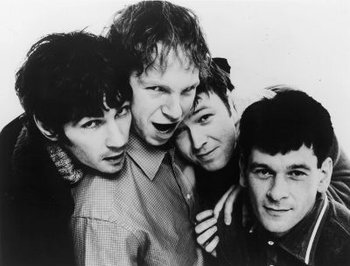 Space's 1996 incarnation (l-r: Tommy, Jamie, Franny, Andy)
Influences: Frank Sinatra, Ennio Morricone, John Barry, Elvis Presley, Roy Orbison, The Kinks, The Who, Jimi Hendrix, The Specials, David Bowie, Quentin Tarantino, Cypress Hill, The B-52s, Devo, Happy Mondays, Kraftwerk, The Cramps, Crass amongst many other things...
"Oh they want to knock us down, cuz they think we're scum
But we will all be waiting when the bulldozers come.
Advertisement:
In a neighbourhood like this, you know it's hard to survive,
So you'd better come prepared cuz they won't take us alive!"
Space, "Neighbourhood"

Space are a psychedelic-indie-punk-hip hop-techno-easy listening group from Liverpool who had some success in the mid-to-late nineties. Their most famous singles include 'Female Of The Species' - featured on several film soundtracks, an Impulse advert and as the theme to Cold Feet - 'Neighbourhood', 'Avenging Angels', and 'The Ballad Of Tom Jones', a duet with Catatonia frontwoman Cerys Matthews.

The band started off as a trio consisting of Tommy Scott, Jamie Murphy and Andy Parle in 1993, with Franny Griffiths, who had previously played in bands with Tommy back in the mid-1980s, joining a year later; his keyboards and samplers were what gave the band their distinct sound. The band became a quartet when David 'Yorkie' Palmer, a long-time friend of the band who produced some of their earlier material, joined as bassist, allowing Tommy to concentrate more on vocals. Andy left the band at the end of 1997, and was swiftly replaced by Leon Caffrey.

The band reached their peak of success with their second album, Tin Planet, in 1998, but began to falter afterwards due to various problems with their record company at the time, not least involving the band's third album, titled Love You More Than Football. The provisional tracklisting was published on the band's website, and song titles were leaked to magazines. However, the album was never actually released and is now only available on bootleg. Around this time, Space were dropped and spent a few years hunting around for labels.

Jamie Murphy left in 2001, and the band called it a day four years later, after releasing one final album Suburban Rock 'n' Roll. Afterwards, Jamie and Franny formed a band called Dust with three others; Leon has moved to Australia; Tommy fronted the Drellas and Tommy Scott & The Red Scare; Franny and Yorkie worked with other bands, and on solo material; and Andy Parle died in 2009. It was meeting up at his funeral that inspired the three original members to reunite the band.

In 2011, the band announced they would be Back from the Dead to record a brand new album Attack of the Mutant 50ft Kebab, albeit without Yorkie and Leon, and with a new drummer, bassist and additional keyboardist.

In 2019, Love You More than Football was finally released as part of a career-spanning Anthology set, almost two decades since the project was abandoned.

The band provide examples of:

The band's music provides examples of: