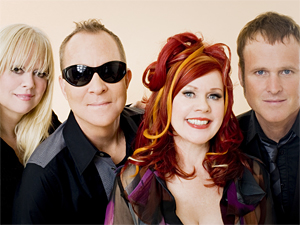 Left to right: Cindy, Fred, Kate and Keith.
We were at the beach
Everybody had matching towels
Somebody went under a dock
And there they saw a rock

It wasn't a rock
It was a rock lobster
—The B-52's, "Rock Lobster"
Advertisement:

The B-52s are a New Wave Band out of Athens, Georgia, which later became the same birthplace of R.E.M.. They're most well-known for their deliberately camp, colorful image, quirky Sci-Fi-themed songs and beehive hairdos worn by the female members (hence the name - said beehive wigs resembled the nose of the Boeing B-52 bomber).

"Dance These Tropes Around":