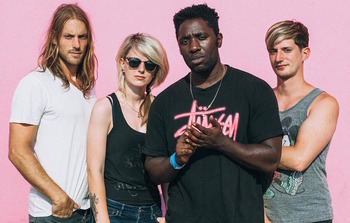 Bloc Party are a British rock band formed in 1999. They're often stuck on the indie label, mainly due to their first album, Silent Alarm, being weighed amongst other indie albums of the time. However, with the second and third albums they have branched into a more electronic-sound while still maintaining some elements of indie rock. The fourth album, imaginatively named Four, features a heavier guitar sound that steers back into Silent Alarm territory and keeps going past the stopping point.
Advertisement:

Their six albums are:

They also released two EPs in 2004 prior to Silent Alarm; Bloc Party, and Little Thoughts.

The band had been on hiatus from 2009 to 2011, with 3 out of 4 members doing separate projects; Kele released his solo album The Boxer in 2010, Russell teamed up with Milena Mepris of Black Moustache to form Pin Me Down, and Gordon Moakes joined Young Legionnaire with Paul Mullen of The Automatic fame. However, they have returned with a new album, Four, and are touring again.

The band and their music contains examples of: