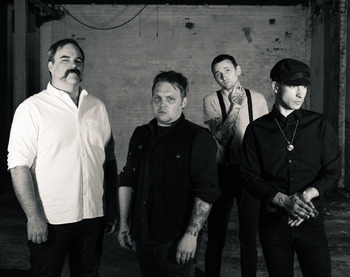 Daughters are a Genre-Busting rock band from Providence, Rhode Island. Their sound is most commonly pigenonholed as Noise Rock, but over the course of their career they've done everything from mathgrind to Post-Punk to industrial.

They were founded in the early aughts by vocalist Alexis S.F. Marshall, guitarist Jeremy Wabiszczewicz, and drummer Jon Syverson following the breakup of their previous band, the grindcore act As the Sun Sets. They added guitarist Nick Sadler and bassist Pat Masterson to the lineup before releasing their debut EP, Daughters, in 2002, and debut LP, Canada Songs, in 2003. These records were mathy grindcore in the same vein as As the Sun Sets, featuring extremely short, fast songs with Harsh Vocals. However, on the subsequent album Hell Songs, the band started to come in their own, switching to a more Noise Rock inspired sound while Marshall abandoned the metal screams in favor of a clean singing style reminiscent of David Yow and Nick Cave. They became known for their raucous and violent live shows, with Marshall frequently performing completely nude and assaulting audience members, among other things. They released a Self-Titled Album in 2010, considered to be the band's most diverse and accessible record to date, but broke up shortly afterwards due to increasing tensions between Marshall and the rest of the band.

The band lay dormant for 3 years before Marshall and Sadler were convinced to bury the hatchet with each other. The two then reached out to Jon Syverson and bassist Samuel Walker, both of whom agreed to reform Daughters, and work was started on a comeback album. After a lengthy creative process which saw over a hundred songs written, the band finally returned with You Won't Get What You Want in 2018, to the best sales and reviews of their whole career.

I'VE BEEN CALLED A TROPER:

"In the air: shrieks
The breath is long
And the fires are out
The water sits still"