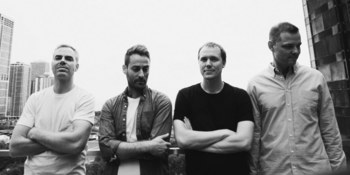 Pictured: the re-formed and expanded band in 2017. Not pictured: the house from their album covers.note from left to right: Nate Kinsella, Mike Kinsella, Steve Holmes, and Steve Lamos.
"Let's just forget
Everything we said
Everything we did
Best friends and better halves
Goodbyes
And the autumn night when we realized
We were falling out of love"
—"Never Meant"
Advertisement:

American Football are a Midwest emo band from Urbana, Illinois, and easily one of the most iconic bands in the scene, originally active from 1997 to 2000. The band is made up of:

The band's history traces back to 1996 when Kinsella, drummer for cult emo band Cap'n Jazz, and Lamos, a guitarist for many other bands, collaborated with brothers David and Allen Johnson on a couple of songs under the name of The One Up Downstairs. However, the band splintered before these songs could be released.note the Johnsons went on to form Very Secretary, and the One Up Downstairs recordings were later rescued years later by American Football's label, Polyvinyl Not wanting to give up music, Lamos and Kinsella later began playing with Holmes, forming what would become American Football.

As you can see from the original years active, they weren't around that long. In their original run, they only had two releases: an EP and a full-length studio album, both called American Football. Whenever people talk about this band, it's almost always in regard to the second release.

Initially, its release had a similar experience to works such as The Velvet Underground & Nico and In the Aeroplane Over the Sea — nobody really cared for it, nor did they pay any attention to it, and the band broke up shortly after its release, with Kinsella later working on the solo project Owen, and playing drums with Owls.note a band that is essentially a re-formed Cap'n Jazz minus bassist Davey von Bohlen, who founded his own cult emo band, The Promise Ring Over time, however, people began to listen to it and began to praise it for its mix of Emo, Math Rock, and indie. When the deluxe edition was released in 2014, demand was so great that it caused the website where people could order it from to crash. After 14 years apart, the group reunited the same year, adding Kinsella's brother Nate as a bassist. The band has since toured the world, selling merchandise and even releasing a music video for "Never Meant", the first track off of the LP. In 2016, the band announced the release of a new album for the first time in seventeen years, also called American Football.

Despite originally lasting for only three years, they're considered a landmark in both "classic" emo and 90s indie, as well as being considered essential /mu/core. They helped codify the Midwest emo sound, a brand of emo focused on twinkling guitars and heartfelt, confessional lyrics and vocals.