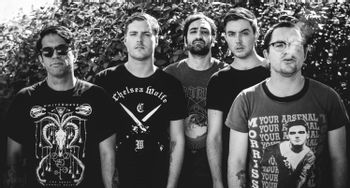 I am dying
- Is it blissful?
It's like a dream.
- I want to dream.
"Dream House" off of Sunbather.

Deafheaven is a Black Metal band from San Francisco, CA. Along with Alcest, they are one of the pioneering bands of the post-black metal/blackgaze subgenre, which combines the tremolo picking, blast beats, and Harsh Vocals of black metal with the sunny atmosphere of shoegaze and post-rock song structures. They started off as a two piece consisting of vocalist George Clarke and guitarist Kerry McCoy, under which they self-released a demo. After this got them some notoriety, they recruited new members to fill out their lineup and released their debut record Roads to Judah in 2011, which attained critical acclaim from the music press and put them on the map. They really took off in 2013, when they released their sophomore album Sunbather to widespread critical acclaim, becoming the most praised album of any genre in 2013 on Metacritic, the first metal band to ever do so. Despite this, they became something divisive among the metal community, with many people decrying them as being "hipster metal". Undaunted, the band continued touring and released a third record, New Bermuda, in 2015. This album featured a stronger metal sound, with an increased preponderance of heavy guitar riffs and less shoegaze influence. The band has continued to push their sound in new directions with 2018's Ordinary Corrupt Human Love—their most sonically diverse release to date, with elements of classic rock, ambient, country, and spoken word alongside the heavier passages—and 2021's Infinite Granite, which is essentially a straightforward shoegaze record with almost no harsh vocals.