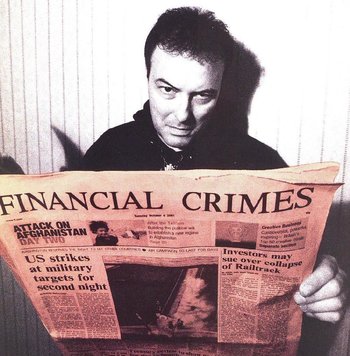 "For every prohibition you create, you also create an underground."
"I think one of the most important things punk brought back was the whole concept of staying independent and doing things yourself. It made music a lot less boring in any category you can name."
Advertisement:

While undoubtedly best known as the frontman of Hardcore Punk legends Dead Kennedys, Jello Biafra (born Eric Boucher, June 17, 1958) has had quite a career since leaving the band as well. He has amassed quite a large number of spoken-word albums about political activism as well as a large body of recorded music that mostly serves as Spiritual Successors to the Kennedys' output. His music recordings, both as collaborations with other artists (D.O.A., Nomeansno, Mojo Nixon, Melvins, most of Ministry as Lard, members of Steel Pole Bath Tub and Grong Grong as Tumor Circus) and with his own band the Guantanamo School of Medicine, have made him a respected elder statesman in the world of punk (a condition he even comments on in the song "Enchanted Thoughtfist"). While his former bandmates from the Kennedys have evolved into the living incarnation of Money, Dear Boy, half-heartedly playing songs "from the good old days about how bad the good old days were", Biafra continues to evolve and to produce some awesome new tunes. He also owns and operates the Alternative Tentacles label.

See Dead Kennedys for his releases with them.

Collaborations with other artists:

With Lard (collaboration with Al Jourgensen and others):

With the Guantanamo School of Medicine:

Tropes present in his post-Kennedys career include: