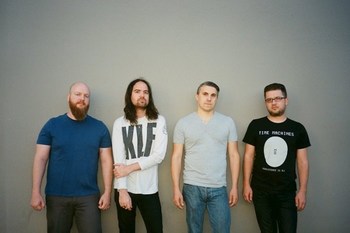 Hailing from San Francisco, California, Bosse-de-Nage is a black metal outfit that has enjoyed relative obscurity pretty much since their first set of demos from 2006, with each member formally being known only by the the first letter of their first names. The band's members have been shy of giving interviews and having a social media presence beyond the odd post from time to time. While nothing new in the black metal scene, it has helped to keep the band focused on what matters most to them: putting out thought-provoking, frantic blackened shoegaze with post-rock, post-hardcore, and even screamo influences.

Their name comes from that of a character from a book written by French symbolist Alfred Jarry, titled The Exploits and Opinions of Dr. Faustroll, Pataphysician. The character in question is a monkey; later in the novel, the narrator wonders whether the monkey ever even existed, or if it was merely a hallucination. The lyricism is a major element of their material, which is inspired mostly by surrealist works, including those of the aforementioned French author, and even Franz Kafka. Topics explored in their songs include human depravity, insanity, sex, death, filth, and bodies. A recurring character named Marie has been the subject of several tracks, functioning as an exploration of almost all of the above topics.

The band has released five albums so far, starting with a self-titled LP in 2010, released on the small label The Flenser. Each year after that, they've released albums II and III respectively. They've also released a split album with blackgaze stalwarts Deafheaven in 2012, entitled simply "deafheaven/Bosse-de-Nage"; Bosse-de-Nage contributed an original track entitled "A Mimesis of Purpose." (People familiar with Deafheaven should be aware that Bosse-de-Nage's music is significantly darker.) In 2015 they returned with All Fours, opening with a track featuring the previously mentioned character Marie. After another three years, the band released their latest album Further Still, in which they have explored more sonic avenues to expand their sound.

A book by the vocalist, known as B. (full name "Bryan Manning", no known relation to Peyton Manning), is currently in the works. You can read an excerpt of said book here: [1]