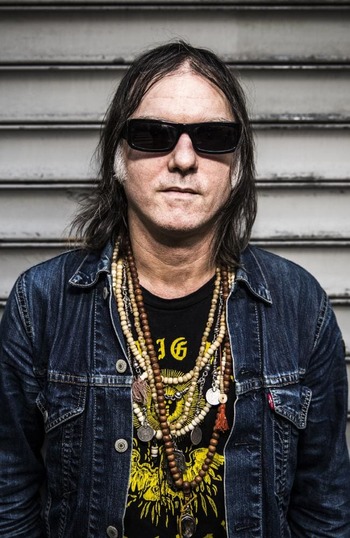 Anton Newcombe, the only guy you need to know

The Brian Jonestown Massacre are a Psychedelic Rock band formed in 1990. The whole band is basically just Anton Newcombe and friends, to the extent that The Other Wiki also uses the terms "musical project" and "collective". A compilation of recording sessions and demo tapes titled Pol Pot's Pleasure Penthouse was released at an unknown date, and has since become a popular bootleg. Their second album, Spacegirl and Other Favorites, was recorded in 1993, but not released until 1995.

Their first true album, Methodrone, was released in 1995, is a fantastic record in its own regard despite Early-Installment Weirdness. It's basically a Shoegaze record, though a highly regarded one, though it had to be Vindicated by History first due to coming off the heels of Loveless.

Their third album, Take It from the Man, released in 1996, ditched the layered guitars in favor of Garage Rock that sounds like it came straight from The '60s, with The Rolling Stones influence starting to come in; Newcombe even said, "I, Anton A. Newcombe, do solemnly swear that the ghost of Brian Jones came to me in the studio and asked me to make this record. P.S. He also asked that I kick the shit out of old Mick and Keith for ripping off his band, girl and money, having him murdered, being glad he's dead, and for not being very nice people.""

They would go on to release two more albums in 1996: Their Satanic Majesties' Second Request, and Thank God for Mental Illness. The former was once again Rolling Stones influence, but rather than taking the Garage Rock of some of their early and late work, they went for the exotic instrumentation of Aftermath (Album), Between the Buttons, and Their Satanic Majesties Request and ran with it. It also contained their biggest hit and Signature Song, "Anemone". The latter, meanwhile, saw Anton show off his acoustic work, containing mostly psychedelic folk outside of the final track, the 33-minute monster "Sound of Confusion", a series of regular songs and sound collages merged into each other.

Their next album, 1997's Give It Back!, saw them combine the previous three albums into one, and notably contains the song "Not If You Were The Last Dandy on Earth", an Answer Song to The Dandy Warhols' "Not If You Were The Last Junkie On Earth" (Itself a Take That! to the Brian Jonestown Massacre). They have since released 12 more albums, 3 EPs, a compilation, and have been featured in Dig!, a documentary capturing their love-hate relationship with the afformentioned Dandy Warhols. Their latest album, a Self-Titled Album, was released in March of 2019, though it can safely be said we could see another one in the future.