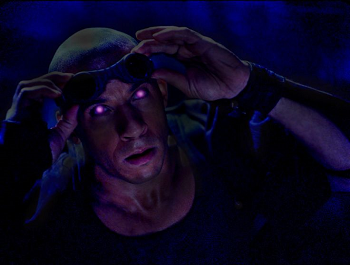 Buffy: One way out means one way in. I want to see them coming.
[The lights go out]
Xander: I guess they're shy.
Angel: I can see alright.
— Buffy the Vampire Slayer, "Choices"
Advertisement:

Innate Night Vision is a type of Super Senses that allows a character or species to see significantly better in the dark than normal humansnote While if we have poor night vision next to many animals it's not as bad as it seems as it's possible to read under the light of the full Moon and under starlight to see the surroundings, even if crudely -and this without going on about what's the human eye helped by a telescope capable of-. It normally comes in one of two flavors: Either the character's ability to see low levels of the normal visible light spectrum is enhanced (low-light vision), or the character is able to see into the infra-red spectrum as well, sometimes described as seeing heat. (It should be noted that "near-infrared" light behaves similar to ordinary, human-visible light, while it's "far-infrared" light that is heat vision.)

This ability is common among many fictional creatures, especially those that live underground or are based in part on Real Life animals that also have excellent night vision. It is also something that many humans might acquire through Magic and Powers. For example, an Animal-Themed Superbeing with an Animal Motif of a species known for its low light vision, such as cats or wolves, is likely to have this ability. In such cases, it may overlap with Animal Eyes.

This is a common power for vampires in urban fantasy, and very often also for werewolves and other werebeasts.

In some cases, creatures that can see well at night find their way around much less well during the day. But that doesn't happen often.

See also Night-Vision Goggles for when this is accomplished through artificial means.

This is Truth in Television for many Real Life animals, however given the large number of species this could apply to, it is better not to list them. In lieu of that, a good rule of thumb is that if the animal is nocturnal or a deep-sea dweller, and is neither blind nor relies on non-optical methods of navigation (e.g. echolocation), it's quite likely to have good night vision.