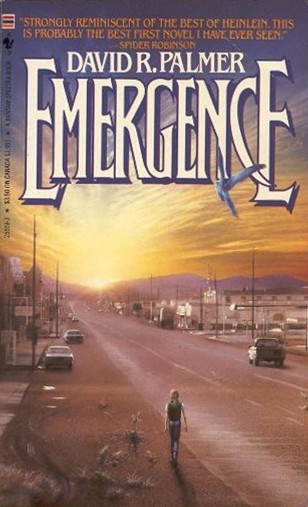 When you're eleven and even more life-altering things are happening around you than a bionuclear war....
Advertisement:

Written by David R. Palmer, Emergence is the story of Candy Smith-Foster, an eleven-year-old black belt genius. She has the good fortune to be exploring her home's survival shelter, along with her pet/sibling Terry (a hyacinth macaw), while her father is out of town (Mom is deceased) when a bionuclear war breaks out. She rides out the attack and subsequent epidemic and emerges from the shelter to sort out her post-apocalypse life and, she hopes, find other survivors. Then she finds a letter from her much-loved karate teacher and next-door neighbor that totally rearranges what plans she has, plus everything she thought she knew about herself.

What she didn't know is that there's a new Human Subspecies around, homo post hominem, stronger, faster, and smarter than homo sapiens, immune to human diseases and with much better senses, or that she's a hominem.

When she finds out, she sets out to find other hominems, who are expected to have survived World War III. She also finds that there's an even bigger threat to her species just waiting to strike.