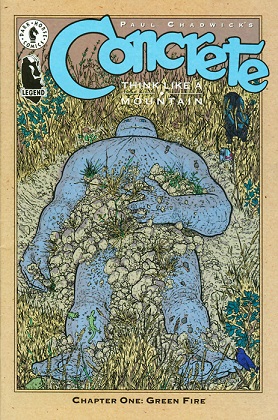 Think Like a Mountain
"How lovely to be so hard to hurt. But someone who never experiences danger and trouble can't generate much of a story. So I find ways, and Concrete suffers."
— Paul Chadwick, introduction to Concrete Volume 1: Depths
Advertisement:

Take the mind of a sensitive political speechwriter, put him in the body of a slightly scaled-down Ben Grimm from the Fantastic Four, and you have Paul Chadwick's Concrete. This series has run on and off since the mid 80's, and while it has never been a massive seller, it never quite goes away, with a small but solid core of dedicated readers. The series is known for Chadwick's realistic while still slightly stylized (and occasionally bizarre) art, and his elegant, musing, introspective writing.

Ron Lithgow is a political speechwriter who, while on a camping trip with a friend, is abducted by aliens and their brains are removed from their bodies and placed in the alien's bodies. He is able to escape (though his friend doesn't make it out), and returns to civilization. Contacting the senator who he works for, he is sent to be studied by government scientists, led by Maureen Vonnegut. Eventually, he tires of the testing and wishes to rejoin the world to whatever degree he can. Unwilling to admit to the existence of extraterrestrials, the government presents him as the lone survivor of a cyborg program, his identity classified. With Maureen still employed to continue researching what else there is to find out about him, Ron hires Larry Munro as an assistant to help him navigate a world that has suddenly grown much smaller and more fragile, but at the same time much larger and more accessible to his strong, tough, indefatigable body.