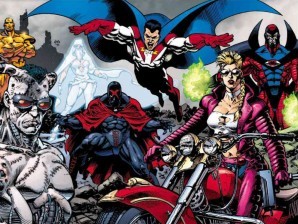 Comics' Greatest World (abbreviated as CGW) was an imprint of Dark Horse Comics, launched in 1993 by "Team CGW"note a group of creators led by Mike Richardson, Dark Horse's founder and publisher with the intention of giving Dark Horse its own superhero pantheon like DC Comics and Marvel Comics. Unlike the majority of Dark Horse's output at the time, all CGW characters and concepts were fully owned by Dark Horse Comics. The original idea was to make 16 issues (four arcs of four issues each) where every arc was set in a city with its own superheroes, antiheroes and villains, all set in a Shared Universe. Although every arc is independent, all of them are connected by "The Vortex", an interdimensional rift that provokes the creation of metahumans all over the USA. Each city has a distinct theme and tone to provide something for every kind of reader, with a controlling editor for each one to keep the vision and the continuity consistent between titles.

The four cities were:

The initial 16-issue maxiseries, called Comics' Greatest World, was a sales success, and several CGW ongoing titles were immidiately launched. The following year, a 12-issue weekly Crisis Crossover series called Will to Power was released which shook up the status quo.

Sadly, the line was an early victim of the 90s comics crash and sales dropped sharply after 1994, prompting Dark Horse to cancel most of the CGW titles and rename the imprint Dark Horse Heroes in 1995. With this restructuring the city branding and controlling editors were dropped, and there was less focus on inter-title continuity (although crossovers between the titles still happened). Dark Horse Heroes also incorporated characters not part of the original CGW continuity, such as Hellboy and The Mask. The rebranding was not enough to save the imprint and by 1996 all remaining titles save for its most popular one, Ghost, were cancelled and the Dark Horse Heroes brand was dropped. The line came to a definitive end in 2000 when Ghost ended its run.

In 2012, Dark Horse Comics made a new attempt at a shared superhero universe with the imprint Project Black Sky. It featured reimagined takes on some CGW heroes along with original and public domain superheroes. Unfortunately, this relaunch was largely unsuccessful, and the imprint was retired in 2015. There was also a limited series by Joe Casey, titled Catalyst Comix, that brought back some of the more minor CGW characters and dropped them in a story about the end of the world.

For more info, you can see this article

in The Other Wiki and this one

in the Dark Horse Wiki.