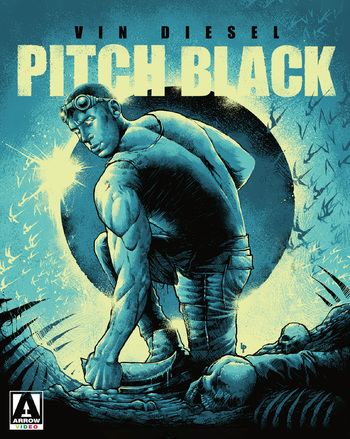 "You're not afraid of the dark, are you?"
Advertisement:

In the year 2678, the Hunter-Gratzner, with its crew and passengers in stasis pods, passes through the debris of a comet. The resulting damage badly cripples the ship, kills some of its crew and eventually causes it to crash land on a nearby planet. The remaining survivors find themselves in a harsh, barren landscape with constant daylight due to its three suns. A bounty hunter, William J. Johns, informs them that one of the passengers was a dangerous criminal named Richard B. Riddick, and worse still, he's managed to escape during the crash.

After a member of the group is killed investigating a cave, he’s the natural suspect and when eventually captured is kept under close watch. However, it soon becomes clear that not only is Riddick the least of their worries, they may actually need his help to survive.

Considered the breakthrough performance of Vin Diesel, the movie was a sleeper hit despite its modest budget and was deemed successful enough to have a big budget sequel, which became The Chronicles of Riddick.

In Pitch Black, you are likely to be eaten by Grues.