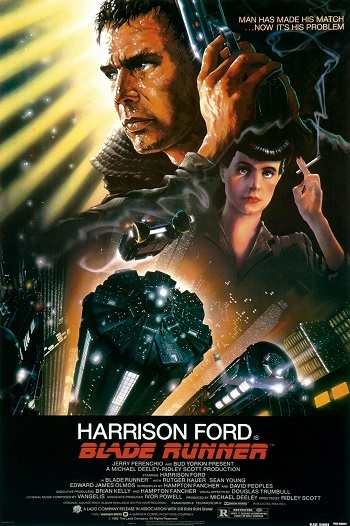 "I've...seen things you people wouldn't believe..."
Early in the 21st Century, the Tyrell Corporation advanced Robot evolution into the Nexus phase — a being virtually identical to a human — known as a Replicant.
The Nexus 6 Replicants were superior in strength and agility, and at least equal in intelligence, to the genetic engineers who created them.
Replicants were used Off-world as slave labor, in the hazardous exploration and colonization of other planets.
After a bloody mutiny by a Nexus 6 combat team on an Off-world colony, Replicants were declared illegal on earth — under penalty of death.
Special police squads — Blade Runner Units — had orders to shoot and kill, upon detection, any passing Replicant.

This was not called execution.
It was called retirement.
Advertisement:

Set in a dystopian near-future City Noir version of Los Angeles, the film revolves around a former Blade Runner known as Rick Deckard (Ford). His job is to "retire" renegade Replicants — rogue androids that are not supposed to be on Earth. Some of the most advanced replicants yet have escaped, and Deckard is given One Last Job to retire them, which he reluctantly accepts. However, his task gets complicated due to the fact that replicants are so like normal humans that Deckard can't help but let his emotions get in the way, by means of empathy and — in the case of the Replicant girl Rachael (Young) — even love.

While it actually underperformed and polarized critics upon release, mainly due to its slow, action-sparse presentation, Blade Runner is pretty much universally praised as a sci-fi classic today for a plethora of aspects, from its visuals and script to its then-groundbreaking soundtrack by Vangelis and the special effects by Douglas Trumbull that still hold up well. It also established much of the tone and flavour of the Cyberpunk movement as well as the film style of Tech Noir.

There have been varying cuts of the film released since its first theatrical release. A definitive version with director Ridley Scott's full involvement called The Final Cut was released in December 2007. The film was fully restored, received a 4K high-def digital transfer, and used CGI to correct a few sloppy special effects and fix continuity errors.

The film also inspired a 1985 Video Game for home computers, as well as a much-praised 1997 point-and-click adventure game developed by Westwood Studios.

Blade Runner was loosely based on the Philip K. Dick novel Do Androids Dream of Electric Sheep?, with Dick's approval. The title itself comes from the novel The Bladerunner by Alan E. Nourse.note though in a roundabout fashion; the writer Hampton Fancher took it from the William S. Burroughs book Blade Runner: A Movie, an unfilmed script which was originally meant to be a treatment of Nourse's novel but became its own novella. Other than the title, the movie has nothing to do with The Bladerunner. It just sounded cool. Not to disappoint anyone, but no one runs on blades in this movie.

Interestingly, the director's cut was the second ever title to be released on DVD, released on March 27th, 1997 (the first ever film was Twister, released the day prior.)

"It's too bad she won't live! But then again who does?"
Feedback

Zhora runs into multiple sheets of glass while being shot.

Example of:
Sheet of Glass

Zhora runs into multiple sheets of glass while being shot.