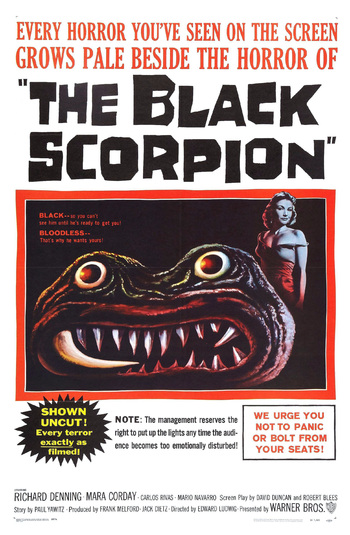 The Black Scorpion is a 1957 giant monster movie directed by Edward Ludwig.

When a volcano in Mexico erupts, Dr. Hank Scott (Richard Denning) and his partner Dr. Arturo Ramos (Carlos Rivas) venture out to perform a geological survey. When they do so, they discover a destroyed house and police car, as well as an abandoned baby.

Continuing on with the baby to the village of San Lorenzo, they learn that villagers have disappeared, that livestock have been killed, that homes have been destroyed and that strange roars have been heard in the night. The villagers suspect all this to be the work of demonic bulls. Scott also meets and falls in love with local rancher Teresa Alvarez (B-Movie scream queen Mara Corday) and makes friends with a young boy named Juanito.

One night, the cause of all the trouble is revealed; giant prehistoric scorpions that were released from the cavern they lived in by the volcano. Although the cave is successfully sealed after an expedition into its depths, the largest scorpion manages to escape, wherein it makes its way to Mexico City for a final showdown...

The special effects, by Willis O'Brien of King Kong (1933) fame, were considered cutting edge back in the day it was released.