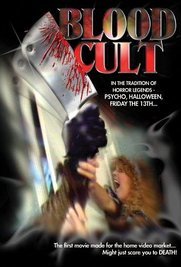 "In the tradition of horror legends 'Psycho,' 'Halloween' and 'Friday the 13th!'"
Advertisement:

At an Oklahoma college, a Serial Killer is slaying women, taking one body part and leaving a gold medallion in its place. While investigating the crimes, a detective discovers that the amulets are connected to a cult that worshipped a dog god.

This film is most notable for being the first Direct to Video horror film ever made. Despite its advertising, it was not the first shot-on-video horror film, being predated by Boardinghouse in 1982 and Sledgehammer in 1983. A sequel titled Revenge was released in 1986.

Despite being also called "Slasher", it has nothing to do with the series Slasher.