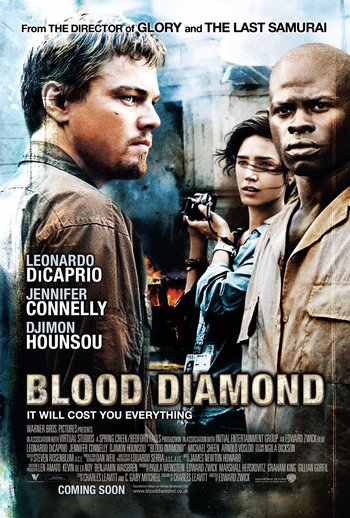 "That's for breaking my TV, bru."
"I understand white people want our diamonds, yes. But how can my own people do this to each other?"
— Solomon Vandy
Advertisement:

Blood Diamond is a 2006 film about blood diamonds. It was directed by Edward Zwick and stars Leonardo DiCaprio, Djimon Hounsou and Jennifer Connelly. Set during the Sierra Leone Civil War in 1999, the film shows a country torn apart by the struggle between government soldiers and rebel forces. It follows two main points of view. Solomon Vandy is a Mende fisherman; his village is attacked and his son taken to be a child soldier, and the rest of his family goes missing while he himself winds up working in a slave camp. Danny Archer is an Anglo-African amoral ex-mercenary from Rhodesia (present-day Zimbabwe, though he refuses to acknowledge that) and diamond smuggler. He is arrested trying to smuggle diamonds by using a herd of goats as cover, and meets Solomon while in prison.

Solomon had discovered a large diamond during his time as a slave, and hidden it carefully before he is arrested during an attack on the slave camp he was working at. The only other person who knows about the diamond is the commander of the slave camp, Captain Poison, who quickly places a bounty on Solomon's head. When Danny hears about the diamond, he offers to help Solomon find his scattered family in exchange for it. They are soon joined on their quest by American reporter Maddy Bowen.

Along with The Departed (which came out a month before it), Blood Diamond is often credited with causing a major shift in Leonardo DiCaprio's public image, thanks to him successfully Playing Against Type as a hard-edged career criminal. For most of the early 2000s, he was still primarily known as the boyishly handsome romantic lead of Titanic and Romeo + Juliet, and was perennially typecast as youthful and vivacious heartthrobs—even in more serious films like Gangs of New York and The Aviator. DiCaprio's role as the thoroughly antiheroic Danny Archer gave him a chance to show off his true range, paving the way for his later acclaimed roles in Inception, Django Unchained and The Wolf of Wall Street.

Not to be confused with the similarly named Documentary Blood Diamonds.

this film provides examples of: