Film / Where the Buffalo Roam 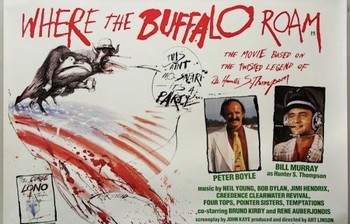 "Get a grip, Thompson"

Where the Buffalo Roam is a 1980 American drama/comedy movie staring Bill Murray as Hunter S. Thompson and Peter Boyle as his attorney Carl Lazlo. The movie loosely depicts Thompson's rise to fame in the 1970's along with his friendship with Oscar Zeta Acosta (Called Carl Lazlo in the film).

The film begins with Thompson trying to meet a deadline for an article he is writing on the now missing Carl Lazlo. From this point forward the film is mostly told through flashbacks that depict the adventures Thompson had with Lazlo.

The film provide examples of: