Film / Where Are My Children? 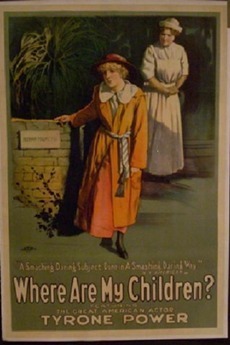 Where Are My Children? is a 1916 drama written and directed by Lois Weber and Phillips Smalley, starring Tyrone Power Sr. (father of the Tyrone Power who would be a leading man in the 1940s and 1950s in films like Witness for the Prosecution).

Richard Walton (Power) is a district attorney. He is busy with an obscenity case in which he is prosecuting a man for distributing birth control literature. Richard longs to be a father, but unbeknownst to him, his selfish wife has no interest whatsoever in being a mother. Mrs. Walton doesn't want motherhood to crimp her high society lifestyle, so she gets an illegal abortion from one Dr. Malfit. As it turns out, this is her third abortion.

Lois Weber was a "message" filmmaker who made movies that would have been considered Oscar Bait if the Oscars had been a thing in the silent film era. Where Are My Children? has something in it to offend almost everyone, being anti-abortion, pro-eugenics, and pro-birth control, a rare combination in American political discourse (though not so much at the time).