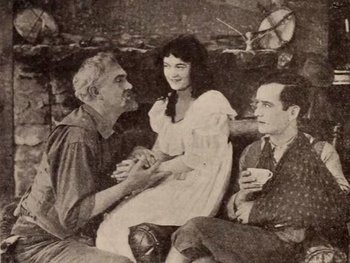 It is a quasi-satirical take on the Western. Judge Brand is a former gold prospector who struck it rich during the 1849 gold rush. Now in his old age, Brand is increasingly nostalgic for the days of his youth, and because he is rich, he can do something about it. He tasks his loyal secretary, Tom Robbins, with literally recreating the gold rush boom town of Nugget Notch, and finding people to live there.

Tom goes off to California but unsurprisingly finds people less than enthusiastic about starting up a Wild West theme town. He makes it to San Diego without any success until he has the good fortune to run into "Castle's '49 Camp". J. Gordon Castle runs what is basically a Wild West theme experience at a San Diego amusement park, and business is very bad. Consequently Castle leaps at the chance to take his Wild West show and all the actors therein to the empty spot where Nugget Notch once was, all for the benefit of Judge Brand.

Among the actors in the troupe are lovely young Peggy Bobbett, who immediately draws the attentions of Tom. This enrages evil "Gentleman Jim" Raynor, who runs the saloon in the Wild West show. Jim, who is quite evil, wants Peggy for himself.

Jean Hersholt, who plays Jim Raynor, can be seen here right at the start of his 40-year career as a character actor.