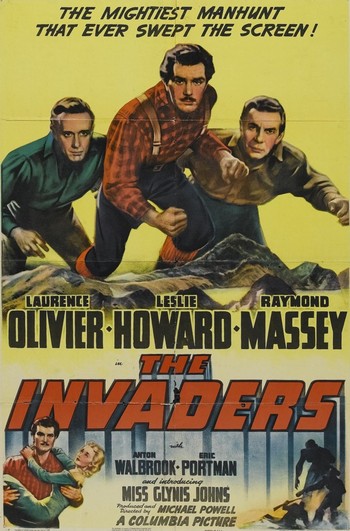 A serious case of Trailers Always Lie, since these three men aren't ever seen together or have more than 15 minutes of screen time.
Advertisement:

This 1941 film follows the story of six Nazi German soldiers as they escape their U-boat 37 and terrorize small parts of Canada. Slowly, they lose men, one by one, as they face the resilient Canadians, the rugged landscape, and are faced with true freedom and democracy.

Stuck in the chilly north, the Germans find a pair of Hudson’s Bay Company trappers, Johnnie (Olivier) and the Factor of the shop (Finlay Currie). The Nazis tie up and mistreat both men, finding a plane that crash lands them into Manitoba. There they meet a village of friendly Hutterites. Their leader, Kevin (Walbrook), lets them stay, as is their friendly wont, but the Germans quickly get kicked out.

With only two men remaining, Lt. Hirth (Eric Portman) and Lorhmann (John Chandos), they walk their way to the secluded beauty of Banff and meet writer, Philip Armstrong Scott (Howard) who they immediately dislike for his bohemian ways, but learn not to cross with even the most peaceful of Canadians.

The last man left standing is Hirth, who manages to escape on a train heading towards the currently neutral America. However, he meets native Torontonian, Andy Brock (Massey), who will not let him get away to America.

Pressburger won an Academy Award for Best Writing (Original Screenplay) for this film, and the film proper was nominated for Best Picture but lost to Mrs. Miniver.

Powell hoped this Propaganda Machine film would stir up the Americans into joining the war by showing them a real threat of German infiltration through Canada. Which never happened, by the way, although German U-boats destroyed several Canadian merchant ships (during the Battle of the St. Lawrence) on their way to supply necessary oil and petroleum and other important supplies to Britain. Similarly to the film, however, a team of Nazi German saboteurs landed in the US but were quickly caught and later executed. After that no further attempts were made.