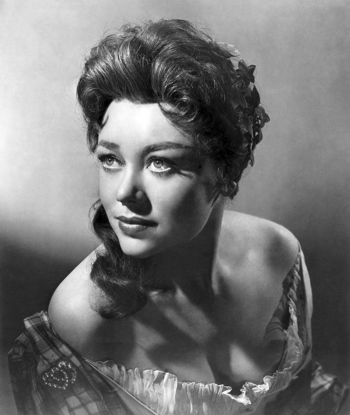 Glynis Johns (born October 5, 1923 in Pretoria, South Africa) is a British film and stage actress active for over 60 years, and one of the last living performers from The Golden Age of Hollywood.

From the West End of London playhouses to the silver screen, to TV, and Broadway, and everything in between, her striking beauty, lovingly contrasted with her husky, feminine voice made her a favourite among many film fans. One of her most famous roles is the suffragette mother Winifred Banks in Mary Poppins.

Born to British theatre actors in South Africa, she began her career at the age of 10 in England, working on the stage and eventually making it to the big screen in the late 30s.

Opportunities to star in bigger films came with the Michael Powell and Emeric Pressburger, 49th Parallel and with the Robert Donat film, The Adventures of Tartu, all from the early 40s. Continuously working on the stage and in film, Johns found success in the 1948 mermaid film Miranda. And she also co-starred in the once neglected Danny Kaye film, The Court Jester.

As the years passed, Johns was relegated to character parts, but this era also gave her most well-remembered roles, like the neglectful suffragette mother in Mary Poppins and her Tony Award winning turn as Desiree Armfeldt in A Little Night Music.

Throughout the 70s, 80s, and 90s, Johns didn’t stop: she appeared on Cheers, romantic comedies, and in her last film role, the Molly Shannon Cult Classic, Superstar.