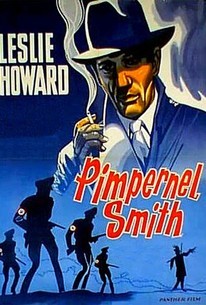 General von Graum: Why do I talk to you? You are a dead man.
Smith: May a dead man say a few words to you for your enlightenment? You will never rule the world, because you are doomed. All of you who have demoralized and corrupted a nation are doomed. Tonight you will take the first step along a dark road from which there is no turning back. You will have to go on and on, from one madness to another, leaving behind you a wilderness of misery and hatred. And still you will have to go on, because you will find no horizon, and see no dawn, until at last you are lost and destroyed. You are doomed, captain of murderers. And one day, sooner or later, you will remember my words...
Advertisement:

In 1939 the Nazis continue their program of internment and extermination of those who don't conform to their ideals. The days are dark, but rescue is at hand, in the unlikely form of a rather eccentric archaeology professor, Horatio Smith, and his band of loyal students.

Pimpernel Smith is a British 1941 anti-Nazi thriller, produced and directed by its star Leslie Howard, which updates his role in the 1934 film The Scarlet Pimpernel from Revolutionary France to pre-World War II Europe. The British Film Yearbook for 1945 described his work as "one of the most valuable facets of British propaganda". The film is also notable for helping to inspire Swedish diplomat Raoul Wallenberg to mount his real-life rescue operation in Budapest that saved tens of thousands of Hungarian Jews from Nazi concentration camps between July 9 1944 and January 17 1945.

A dead man says a few words to a Nazi general, for his enlightenment.

A dead man says a few words to a Nazi general, for his enlightenment.