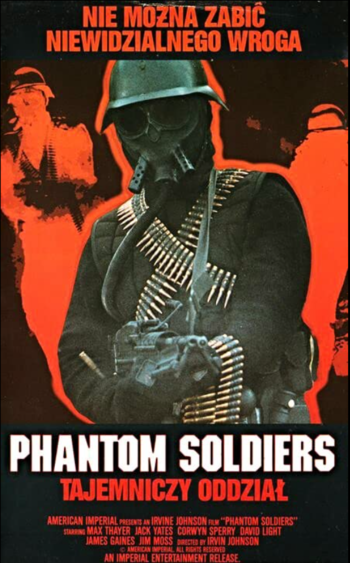 If you can see it, you're already dead.
Advertisement:

Phantom Soldiers is a 1987 military-action film produced between Philippines and the United States, starring Max Thayer (Mac from No Retreat, No Surrender 2).

In the aftermath of The Vietnam War, a powerful, dangerous team of black-clad operatives - dubbed "Phantom Soldiers" by locals - are indiscriminately killing civilians and soldiers alike, and slaughtering whole villages without any clear motive or intent. Sergeant Daniel Custer (Max), whose brother is reported missing in action while in Vietnam, volunteers to be sent to investigate, and ends up facing the most powerful and dangerous of enemies ever encountered by the US Army.

But what are the Phantom soldiers, whom do they serve? And who can live to tell their encounter with these terrifying, gasmask-wearing killing machines?