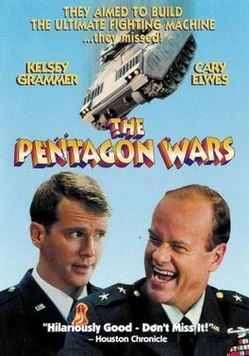 Sgt. Fanning: ...A troop transport that can't carry troops, a reconnaissance vehicle that's too conspicuous to do reconnaissance...
Colonel James Burton: ...and a quasi-tank that has less armor than a snowblower, but has enough ammo to take out half of D.C.
—A summary of the Bradley Fighting Vehicle
Advertisement:

, as designed, was a deathtrap

. If it were to be sent into combat without significant modifications, it could kill hundreds of its own passengers. So what do you do when the top brass orders you to make it pass the tests, so that it can be deployed in the field on schedule and make them look good? Do you make a somber, tragic movie showing the depths to which humanity can sink? Do you do a scathing news exposé of the affair and demand accountability?

No, you make a made-for-TV Black Comedy starring Kelsey Grammer as a Maj. General Partridge, who wants the Bradley in production no matter how much of a liability it is to its own crew; Cary Elwes as Lt. Colonel Burton, who will do everything he can to prevent that from happening; and Viola Davis as an admin sergeant assigned to help Burton.

This movie is based directly on the memoir The Pentagon Wars: Reformers Challenge the Old Guard by Colonel James G Burton, and presents him as he presented himself: an idealistic crusader going against a corrupt and inefficient military procurement system. Historians of the U.S. military have actually found Burton's account of Bradley development and his part in it to be biased and misleading, so the narrative of this movie should be taken with a huge grain of salt.

This 1998 made-for-TV movie provides examples of:

The revolutionary Bradley fighting vehicle was, in its original form, an overdesigned armoured personnel carrier that was also supposed to be part-reconnaissance vehicle, part-tank destroyer.

It would have also been a death trap for its occupants in a battle situation.

Example of:
Master of None

The revolutionary Bradley fighting vehicle was, in its original form, an overdesigned armoured personnel carrier that was also supposed to be part-reconnaissance vehicle, part-tank destroyer.

It would have also been a death trap for its occupants in a battle situation.