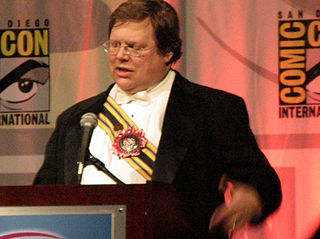 Philip Foglio (born May 1, 1956) is an American comic book artist famous for comic books including Girl Genius (co-written with his wife Kaja), and Buck Godot: Zap Gun for Hire.

He is also the writer and artist of the gaming comic What's New? with Phil and Dixie.

Other career highlights include Myth Adventures (a comic book adaptation of the novels by Robert Asprin), and a number of miniseries for DC Comics (including a well-received revival of Stanley and His Monster that managed to make the fluffy whimsical series into part of The DCU without making it Darker and Edgier). He's also done artwork for a number of Magic: The Gathering and Munchkin cards and for Spiderweb Software's Nethergate and Avernum 1-3.

◊, the mascot of BSD operating systems. While the canon image was created in the 1980s by John Lasseter, the idea originated from this

He co-wrote the novel Illegal Aliens with Nick Pollotta.

Works by Phil Foglio with their own trope pages include:

Other works by Phil Foglio provide examples of: