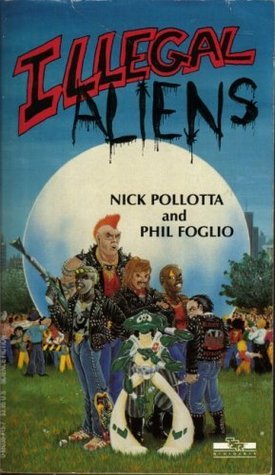 Illegal Aliens is a book co-written by Phil Foglio and (the late) Nick Pollotta with occasional illustrations by Phil. It's presented in two parts:
Advertisement:

Part One deals with Earth's First Contact with aliens. A 400 meter diameter white sphere lands in Central Park, on top of a company softball game. The aliens announce over every available communications device on the planet, in appropriate language (Except Australia, who received their broadcast in French. Even aliens make mistakes.) that humanity is going to be tested for entry in The Galactic League. However, this is to be a trial-by-combat. The alien ship abducts a rather ordinary "road maintenance crew" ... no, actually it abducts a vicious street gang named The Bloody Deckers (Thanks to Lost in Translation. Remember about aliens not being perfect.) as representatives of Earth to participate in the trials. If the humans win, the Earth is admitted into the League. If they lose, Earth will be destroyed. Actually that's not really true either.

In actual fact, the ship is run by a bunch of interstellar criminals, headed by the blue-furred Leader Idow, who like to land on pre-contact planets and screw with them. The participants never win, get shredded by increasingly violent "tests," and the aliens sit back and watch the chaos as the planet's inhabitants panic at their imminent destruction. Only this time, perhaps the aliens picked the wrong road maintenance crew to participate. Part one culminates in The Great Golden Ones arriving and saving the day - kinda. In the end, Earth is deemed too violent and primitive to be allowed admission into the League, and The Great Golden Ones blockade the planet until we can learn to play nice.

Part Two deals with the events that occur after humanity decides that The Great Golden Ones are a bunch of tossers, decide to take matters in their own hands, build their own spaceship, and take their petition for admission directly to the Galactic League themselves. In the meantime, they invent an imaginary material, bring back to life an extinct race of aliens, spread chaos across the galaxy, and generally make The Great Golden Ones look like the overbearing, self-important tossers that they kinda are.

It is, obviously, a comedy that goes on to poke fun of, toy with, and deconstruct just about every Sci Fi trope there is.

Some of the tropes speared in this book are: