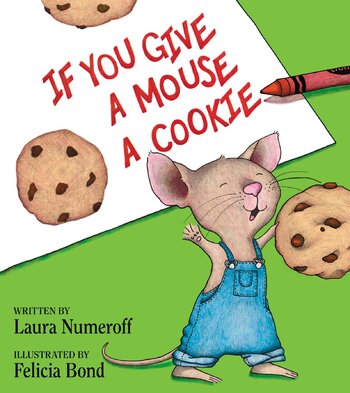 If You Give a Mouse a Cookie is a 1985 children's picture book written by Laura Numeroff and illustrated by Felicia Bond. Each page has a large, colorful picture and short sentence telling the story of a (nameless yet eponymous) mouse and an equally nameless boy. The story starts, naturally, with the boy giving the mouse a cookie. The story goes on from there, with the mouse needing a new item on each page. It ends up with the mouse, once again, wanting a cookie.

In 2015, an animated special based on the original book was released on Prime Video. A full television series followed, which premiered on November 7, 2017 as a production with Canada's Mercury Filmworks.

A narrated version of the original story was also featured on an episode of Reading Rainbow in 1993.