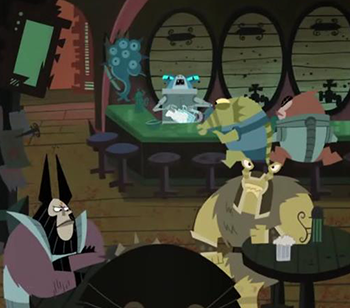 Reg: Welcome to the Salty Spitoon. How tough are ya?
Tough Guy: How tough am I? How tough am I? I had a bowl of nails for breakfast this mornin'!
Reg: Yea-hah, so?
Tough Guy: Without any milk.
Reg: (visibly intimidated) Uh, right this way, sorry to keep you waiting.
— SpongeBob SquarePants
Advertisement:

Bad guys tend to lead a vicious lifestyle of gambling and sex, as well as alcohol, tobacco and other drugs (see I Need a Freaking Drink, Good Smoking, Evil Smoking and Drugs Are Bad).

Typically the site of Villains Out Shopping, but if the heroes wander into such a seedy dive, chances are that a Bar Brawl will break out when the local thugs attempt to intimidate the newcomers. On the other hand, the bar might be a no-violence Truce Zone enforced by powerful proprietors. As such, it might dub as a Good-Guy Bar in the middle of a Wretched Hive.

In modern times, this is where you will find Orcus on His Throne — a modern-day royal court, complete with bodyguards and a crowd of lessers cheapening themselves for their master's amusement.

Contrast of course Good-Guy Bar, where heroes (or sometimes heroes and villains) hang out. A Den of Iniquity is a comparable setting that's hidden from the public. If set in a sci-fi or fantasy setting, it will likely be a Bar Full of Aliens.

Sonic and Tails seek shelter in a Siberian tavern, but find themselves in an entirely different kind of danger.

Sonic and Tails seek shelter in a Siberian tavern, but find themselves in an entirely different kind of danger.