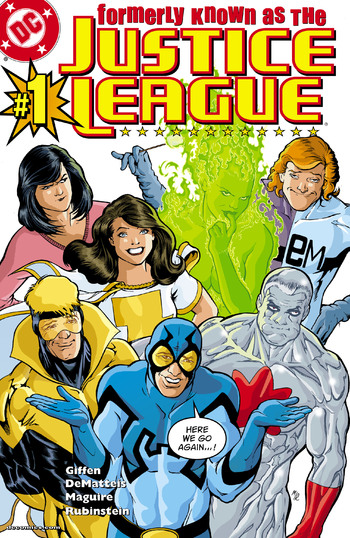 In Formerly Known as the Justice League, Maxwell Lord, in a desperate bid to remain relevant, gathers up former members of the Justice League International and sets up shop in Queens, New York. Unfortunately for him, the locals are not too thrilled at the prospect of having a bunch of C-list superheroes in their neighborhood, and the heroes themselves are ambivalent about working together again. And then aliens invade Queens, seeking the return of Lord's assistant L-Ron.

In "I Can't Believe It's Not the Justice League", the team is accidentally sent to Hell thanks to Booster Gold's stupidity, and their attempts to escape cause them to end up in an alternate dimension with evil versions of themselves.

Fire: [watching a handsome worker hauling their stuff] What do you think Sue— a seven?
Sue: Him? Wake up and smell the Streisand— he's gay.
Fire: How do you known?
Sue: Well, for one thing he's been studying Max's butt the way you've been studying his.
Fire: I still think he's a seven. Maybe even an eight.
Sue: You don't actually rate men On a Scale from One to Ten, do you?
Fire: Of course I do.
Sue: Don't you think that's a tad juvenile? Not to mention sexist?
Fire: You're only saying that because you're married to a four.
Sue: Excuse me?
Fire: Nothing to be ashamed of. I'm sure Ralph has his endearing qualities—Most of which escape me at this moment—But you've got to admit—On the physical level—He's a four.
Sue: I'll have you know that my husband is loving, compassionate... he has a wonderful sense of humor, he—
Fire: He's a four.
Sue: He has flexible body parts!
Fire: [suddenly interested] Hmmmmm. But how well does he use them?
Sue: [hesitantly] How well does he—?
Fire: See? A definite four. Now Plastic Man! There is someone who knows how to—
Ralph: [walks up behind them] Hey ladies — Whatcha doing?
Sue: [whisphering to herself] Oh my god... I'm married to a four!
Ralph: What'd you say sweetie?
Fire: [looking at another guy] Now there's an eight!
Ralph: You're not doing that thing where you rate men on a scale of one to ten, are you, Sue?
Fire: Oh. Does she do that?
Ralph: All the time. I'd be embarrassing... except she always tells me I'm a perfect ten!
Fire: [looking smugly at Sue] Perfect?
Sue: In his way.
Ralph: My wife, on the other hand, couldn't be rated—'Cause she's off the scale!
Sue: That's my hubby!
Ralph: [walking away] Well... gotta go talk to Max
Sue: He is a four—But I really love him.
Ralph: [from the distance] WHAT DO YOU MEAN I'M A FOUR?!
Fire: He heard you
Sue: Y'think?