On a Scale from One to Ten 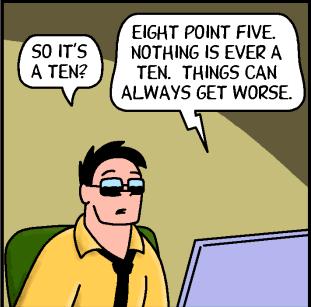 "On a scale of one to ten, I'll give you a three!"
— Vegeta, Dragon Ball Fighter Z
Advertisement:

A character rates something on a scale from one to ten, often for comedic effect.

The results split into two types:

Compare Grade System Snark. See also Top Ten List, for other things from one to ten, and Broke the Rating Scale when the results don't fit the scale. Contrast Four-Point Scale.

Examples of an actual number: