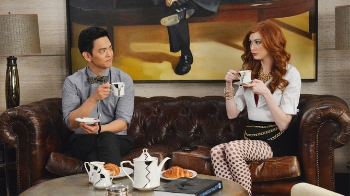 Selfie is a television series based loosely on My Fair Lady that premiered in Fall 2014 on ABC, created by Emily Kapnek (Suburgatory and As Told by Ginger).

The show centers around vapid, attention-hungry former ugly girl Eliza Dooley (played by Fake American Karen Gillan), and explores her attempts to become more of an actual likable person as opposed to a person who just receives a lot of "Likes" online. To do so, she enlists the help of Henry Higgs (played by John Cho), who works at her pediatric pharmaceutical company as a PR man (she's a hot pharma rep, the New Tens version of sexy stewardesses) to "re-brand" her. Of course, Henry isn't perfect himself: if Eliza has loose morals, he's too uptight, and while he starts out trying to help her, she might be helping him just as much.

Unfortunately, it was poorly marketed by ABC, saw bad ratings and was cancelled after only a single half-season. (The remainder of the season went up on Hulu.) Selfie gained a cult following and critics who initially gave harsh reviews saw its potential after watching more episodes. TV Guide called it the "Best Turnaround" series of the decade.