Literature / Flowers in the Attic 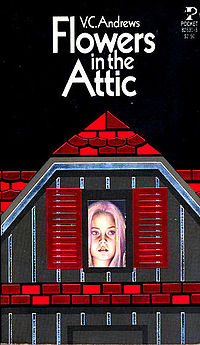 Such wonderful children. Such a beautiful mother. Such a lovely house. Such endless terror!note Cover of the first US edition, by Milton Charles, Myles Sprinzen and Gillian Hills
It is so appropriate to color hope yellow, like that sun we seldom saw. And as I begin to copy from the old memorandum journals that I kept for so long, a title comes as if inspired. Open the Window and Stand in the Sunshine. Yet, I hesitate to name our story that. For I think of us more as flowers in the attic. Paper flowers. Born so brightly colored, and fading duller through all those long, grim, dreary, nightmarish days when we were held prisoners of hope, and kept captives by greed. But, we were never to color even one of our paper blossoms yellow.
— Cathy
Advertisement:

Flowers in the Attic is a novel by V. C. Andrews first published in 1979. The first in the Dollanganger Series.

A lurid tale of lies, secrets, betrayal, and child abuse, Flowers in the Attic is the story of Cathy Dollanganger, her older brother Christopher, and their younger siblings Carrie and Cory. Following the death of their father, their mother Corrine takes her children to live with their rich grandparents, who had previously disowned her for Dating What Daddy Hates. Now her father is dying, and Corrine is determined to get back into his good graces in time to inherit his estate. What the children do not know until they arrive is that their grandfather does not know they exist, and that their mother must keep them a secret until she can break the news to her father.

Upon arrival at Foxworth Hall, the four children are locked in one room under the care of their grandmother, who soon reveals the shocking truth about their mother's disinheritance. All too quickly, the children learn that they will be forced to remain in the attic until their grandfather dies. But as the wait drags from weeks to years, Cathy realizes that their only chance to survive is to escape.