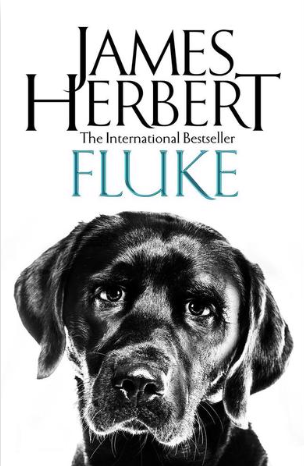 A 1977 novel by James Herbert. A newborn puppy, on acquaintance with his London street market environs, suddenly finds he can see a surprisingly lucid range of colours. Separation from his mother and siblings immerses him in a world of frightening bustle and size, from which he gratefully shelters in the kind arms of his new owner. However, things don’t work out, and he ends up in an animal shelter.

Troubled by fleeting memories of having a body like one of the “giants” in charge of this place, his confused lamentations disturb the other animals, which persuades the vets to put him down. He flees onto the streets, and is found by veteran street dog Rumbo, who trains him to find food.

Shelter in a scrapyard, and occasional food supplied by its “Guvnor,” lend consistency to the wayward lives of Rumbo and his “squirt” protege. Uncanny ability to find nearby hidden food earns the young dog the name Fluke. A police investigation of the yard eventually steers Fluke out of the city and along a strangely familiar country road…

A fondly remembered film adaptation was released in 1995. If you're looking for the novel by Christopher Moore, see Fluke, or, I Know Why the Winged Whale Sings.

The 1977 novel provides examples of: