Literature / The Fox and the Hound 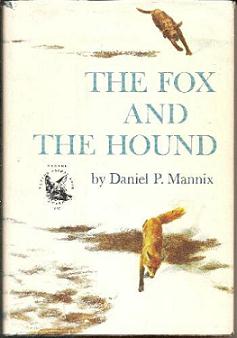 A novel written by Daniel P. Mannix and published in 1967. It has a Disney movie very loosely based on it, which is much better known than the book.

The plot stars a human-raised red fox named Tod. After Tod causes the death of a hunter's prize hound, Chief, the hunter pursues Tod in a fit of vengeance, aided by his aging half-bloodhound Copper. Of ten chapters, Copper gets four as the viewpoint character and Tod six. The novel takes great pains to show both characters' distinctly non-human thought processes - in particular, scent rules their world far more than sight, especially in Copper's case.